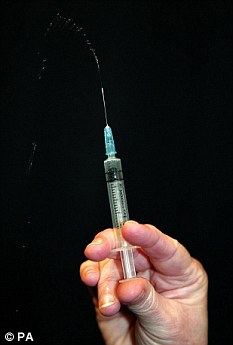 An HIV-positive man infected his wife with the virus because he wanted to start having sex with her again.

The 35-year-old man injected blood into the sleeping woman, who had refused to have a physical relationship for a year after finding out he carried the virus that causes AIDS.

He pricked it twice with a sewing needle soaked in his blood, thinking the pair would be “equal” again.

But he was behind bars in New Zealand today awaiting conviction after admitting to infecting another person with a disease.

The husband emigrated to the country in 2004 with his wife and two young children, neither of whom can be named.

Immigration officials discovered he was HIV positive, but his wife and children were not, during mandatory health checks.

The woman, 33, confronted her partner upon finding out she was infected a year later.

She said: â€œAll he said was he was sorry. He said to me “I used needles on you because I wanted you to be like me so that you could live with me and not leave me”. ‘

She told the court: â€œI just wanted to keep the relationship going for the sake of the kidsâ€¦ He insisted on staying and mentioned that he didn’t worry about sex anymoreâ€¦ anymore. All he wanted was to see the children grow up with both parents under one roof.

But in May of last year, she said, she discovered a sting-like mark on her left thigh. â€œAfter I took a shower I put on the lotion and could feel pain in my thigh. When I looked at it it was turning red like a circle, getting bigger and bigger.

Later that morning, when she unexpectedly returned home from nursing school, she said, she saw her husband in the bedroom with a syringe full of blood.

When she asked him what he was doing, he walked past her and walked away, refusing to discuss it. The wife searched a trash can for evidence of the syringe, but found nothing.

The newspaper reported that two days later the woman woke up with a tingling sensation in her leg. “In my sleep I felt a prick on my leg, I got up … and turned the covers … I looked at (the husband) and he was wide awake.”

She said she asked him if he stung her and he said no. But later she found evidence of “blood spatter” on their quilts, which she said her husband tried to hide from her.

She told him to leave the house – and in September, when her doctor suggested a test during a routine checkup, she found out she was HIV positive.

A nurse who had been in contact with the family and who was present when her GP told her the bad news told her in court: â€œAt this meeting (the woman) was upset. (She) couldn’t understand how she got HIV because she said she hadn’t had sex with her partner for about a year. ‘

Later, in a meeting with an infectious disease specialist, the husband cried and repeated, â€œPlease forgive meâ€.

The Sunday Star Times quoted Simon Harger-Ford of the New Zealand Aids Foundation as saying that the organization had never heard of a victim infected in this way “and with such intent”.

Modified by a sewing machine