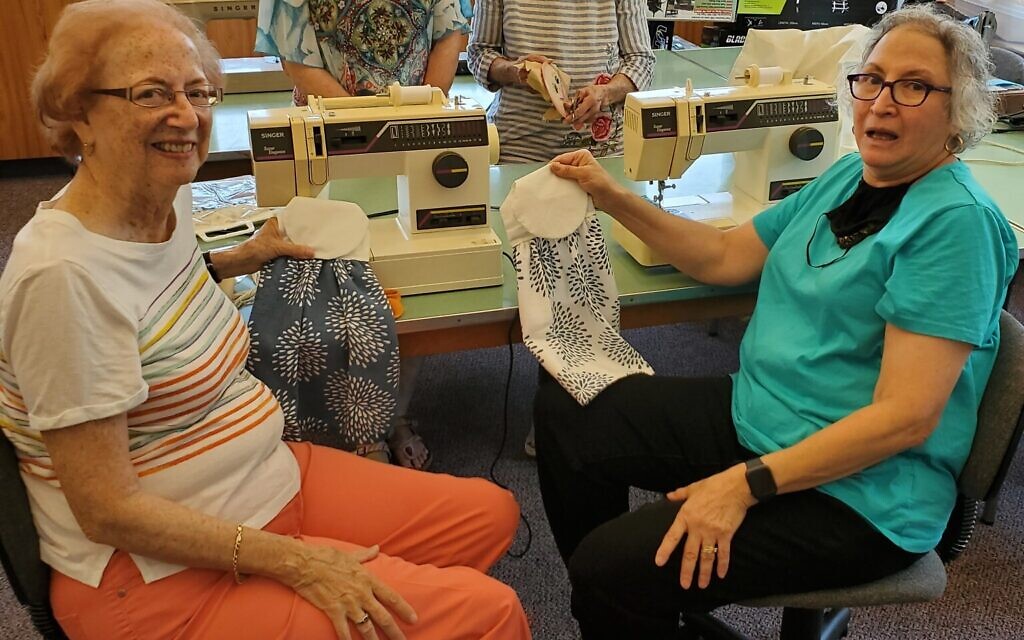 Nancy Rosenthal, Suzanne Gollin, Phyllis Klein and Caroline Liston sat in front of six Singer sewing machines in the Rodef Shalom Sisterhood room last Tuesday. While the gathering was a bit smaller than before the pandemic, Rosenthal said, it was wonderful to be together in person.

For much of the past year, members of the Rodef Shalom Sisterhood Sewing Group have met on Zoom. Participants still sewed pieces for various charities, chatting and helping each other with difficult stitches, but digital encounters just weren’t the same. Rather than their usual two-hour in-person sessions, the virtual meetings lasted only 60 minutes. And it wasn’t that easy to set up a sewing machine and focus on the job while using Zoom, Rosenthal said.

“Being able to really be with each other is a whole different experience,” she said. Now that the group has been back together in person for almost a month, “we can help each other a little bit more.”

The types of items created depend on the needs, explained Rosenthal. Sometimes the group makes blankets, sometimes hats, other times children’s rompers. There were times when the group even made headgear for cancer patients.

The congregation’s sewing group dates back 115 years and “was one of the original committees established at the fellowship’s first organizing meeting in 1906,” according to Martha Berg, archivist for Rodef Shalom.

Early documents indicate that the sewing committee – it was later renamed the Rodef Shalom Sisterhood sewing group – purchased its first sewing machine in June 1906. Berg assumes it was a pedal machine because in 1908, the head of the sewing committee reported the purchase of an electric motor for his machine.

Caroline Liston of Penn Hills recalls joining the group over 40 years ago.

“I was very young and it was a wonderful way to plan my week away from two kids,” she said. “It was relaxing. “

Liston, 74, said when she and a friend started attending the weekly meetings, they added some diversity to the longtime cohort.

“We have cut the average age in half,” she said, adding that she enjoyed being around older women because they had experienced interesting times and were able to offer perspectives and insights. unique ideas.

Phyllis Klein’s family has been linked to Rodef Shalom for more than seven decades. Klein, a resident of Swiss Elm Park, remembers her mother’s neighbors coming to the sewing group years ago.

“After a while I decided as a member to find out what it was about,” Klein said.

What she discovered almost eight years ago was a friendly group of women who also enjoyed doing things for others, she said.

This charitable commitment has been at the heart of the group’s mission for more than a century, said Berg.

In 1920, the Sewing Committee made 699 garments which were scattered among the Gusky Orphanage, Jewish Baby Home, Temporary Children’s Home, Zoar Home, Pittsburgh Baby Home, Red Cross, Hadassah , Erie Orphanage, Irene Kaufmann Institution, United Hebrew Relief, Montefiore Hospital, Pittsburgh Association for the Improvement of the Poor, and individuals. A few years later, a subcommittee of the sewing committee established what was called the ‘Cutout for the Blind’, where members cut up towels, aprons and other items, and delivered them to workshop for the blind to have them completed, Berg added. 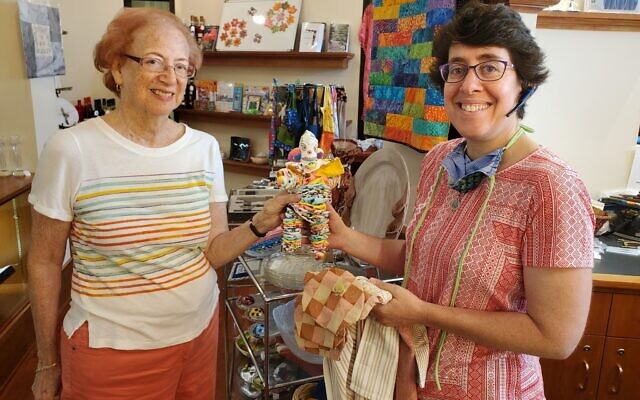 Members of Rodef Shalom’s sewing group attend to each week with an abundance of supplies and a firm commitment to helping those in need. There are enough supplies, organized on shelves and in lockers throughout Rodef Shalom’s Sisters’ Hall, to allow the group to continue making a plethora of items that can be donated for the foreseeable future.

Elaine Rybski, director of Rodef Shalom Gift Corner, assigned members of the sewing group to supply many items currently in the store, including baby blankets, knitted aprons and hats.

It’s an impressive collection, said Rybski, and the sale of the items generates thousands of dollars for Rodef Shalom projects, including congregational picnics, educational efforts and social justice initiatives.

Rosenthal said she is proud of what the group has achieved, both recently and throughout their history, but hopes it will have an even bigger impact.

“We need more people to volunteer and come and donate their skills,” she said. “There is a great need for people who have nothing. PJC

Adam Reinherz can be contacted at areinherz@pittsburghjewishchronicle.org.

China’s CISMA 2021 to showcase innovations in the sewing industry

Painter has sewing needle stuck in liver for 15 years